My mother, who had read the adult version with her book group, worried about the graphic imagery projected in I Am Malala and the impact it would have on my daughter. After my bubble-wrapping dilemma with my son and Monster, I decided to let my daughter proceed with her purchase--I say that as if I had a choice. My children are stubborn with strong minds of their own--I'm proud of that. She bought I Am Malala, Young Readers Edition.

She read it in two days. She wept. She laughed. She wept some more. When she finished, she rushed home and told me all about the book, then shoved it in my hand and said, "You have to read this--NOW!" (No gross under-parenting here--I've read Khaled Hosseini, Salman Rushdie, and many other books depicting not only the violence of the Middle East but also the love and joy and beauty of the people and the region. I also knew Malala's story.)

I could not have selected a better role model for her. Malala Yousafzi says herself, "I am a good girl--I always have been. But now, I must be really good. So I take extra care with what I say and do. No one is telling me to limit myself like this. If anything, the teachers here are always encouraging me to be free, to feel at home. But I'm not really free to be like other girls my age--because of the way the world sees me. When you have such a public role and so many people counting on you, I believe you must always act in the way people expect of you."

Malala Yousafzi understands what it means to be something bigger than herself. She is a movement. An advocate for education for everyone. She created the Malala Fund. You too, can join in the conversation at #WithMalala on Twitter. 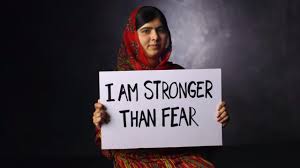 I find Malala's shooting ironic. The Taliban wanted to silence her. They gave her a voice instead.

Alison, I leave you with this quote from I Am Malala. I call it Malala Wisdom: "What I'm finding is that we have much more in common than we have different, and every day we learn something new from one another."

The Letter Y is the end of my journey in the #AtoZChallenge and #AuthorApril. I consider it a privilege to end with Malala Yousafzai.