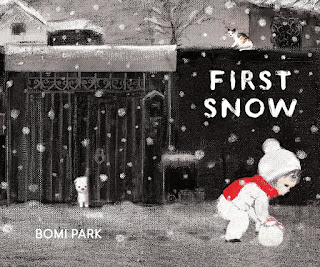 The kids worked cooperatively at their table groups to discuss what word might fill in the blank. I love hearing them chat.
"Well it is a snowflake because 'one flake'."
Followed by: "No. It has seven letters, snowflake has nine."
And: "It is an action. A-- what's that called-- a verb because it is something falling."
Eventually we filled in the blank by using spelling clues to check our thinking, which might not sound like a whole lot of fun, but spelling is awesome and totally fun. Promise.

To our white paper we used white crayons to draw some snow. Lots of tapping. Loads of white lines. And many iterations of "I can't see anything" later, we left our white on white paper behind and came to the reading corner ready to listen to FIRST SNOW.

In the story, a child wakes to the sound of snow tapping against her window. The first snow of winter draws her from her bed. She puts on her boots, coat, hat, and scarf, then sneaks off into the winter night. She pat-pat-pats together a small snowball then roll-roll-rolls it. The ball grows bigger and bigger. Joined in a field by other children an entire snowman village comes together formed by the first snow.

Then, with a perfectly timed page-turn, we see the same child catch a snowflake on her tongue and she’s brought back to her own yard. A single snowman stands near the door. Had she imagined the field of snowmen? Or is that all part of the magic of first snow?

Bomi Park, the author and illustrator, released FIRST SNOW in South Korea in 2012. New to Chronicle Books this year, this book, with simple text and subtle illustrations, is not to be missed.

Meanwhile, back in the reading corner...

Once the story was over we spent time discussing the author's use of language. We reread sections of repeated words and considered how she built movement in the story with limited words. The kids knew that we would use this as a mentor text and we discussed which pieces of the text we would use to build our own first snow narratives.

We agreed on:
Interjections!
Repeated words.
Simple phrases.
A surprise element.
And a setting in the snow.

The narrative had to tell of a time that each student built something in the snow. Some topics they came up with included snow forts, snow angels, snowballs, snowball fights, snowmen, and snowshoe trails.

Then the writing began.

Once we worked through our rough drafts, we conferenced on spelling and grammar. Students moved to their final copies by adding the "surprise element" into their illustrations, rewriting their poems at the base, and then using watercolors to uncover the falling snow.

FIRST SNOW made a perfect mentor text.
Check it out and let me know what you think.

Snow on!
Much Love,
Alison