#AuthorApril: R is for Eric Rohmann in our #AtoZChallenge

There are a million reasons to love his illustrations, inventive design, and playful language. Let's make it a million and one... R is for Eric Rohmann.


In addition to his books, Eric is a gifted and generous teacher of illustration and writing. I've been lucky enough to hear him talk about children's books at various workshops. In one, Eric said something that will stay with me always.


He said, "Children don't read books,
they inhabit them."

I can't tell you the number of times I've used that quote, specifically when talking about the art and design of a picture book.

His work receives the highest praise from the most critical eyes in publishing: KIRKUS kindness, School Library Journal starred reviews, a Caldecott medal and honor, and more. But what I love to see, especially as an early childhood teacher, is the way children critique his work. Eric was right. Children inhabit his stories.


See that little reader in the video? That's my guy at age two. He loved reading My Friend Rabbit every morning in that secret spot behind his chair. I love the way he turns the book at the end, the sound of surprise in his voice, though he's "read" the book a hundred times. (And heard it at least as many.) He becomes part of the book.

Rohmann made My Friend Rabbit so engaging with surprising page turns, animals facing this way and that, a line to trace the flight of the plane. All so engaging. All so thoughtful. A gift from Rohmann to his youngest readers.

Each book he creates is a gift. Publisher's Weekly once said, "Eric has perfected the art of letting the pictures tell the story." Praise from another critical eye, but I believe, with all due respect, that PW was selling Rohmann's genius a bit short. It is not just the pictures. It is the package. The way he delivers story from cover and front matter, to words and images, to the satisfaction his reader gets at his perfectly placed "The End".

Kim, I'd like to share with you how I might use one of Rohmann's books as a read aloud. It happens to be my favorite Eric Rohmann book, Bone Dog. 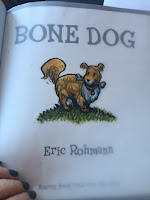 Rohmann plants a twist mid-story that I do not want to give away. I'll skip ahead a bit.

Eric Rohmann always creates a book that his readers can inhabit. From My Friend Rabbit to Bone Dog to Oh!No! we are pulled from our seats and into his illustrated world.

Eric will be back at the Foundation this fall. His workshop is just days before Halloween. I know he has plans to carve pumpkins, work on spooky printmaking, and critique picture book dummies and portfolios. I hope he finds time to read Bone Dog to his guests too. I can only imagine he will open our eyes to more of the magic hidden in Bone Dog's pages.