Linda Sue Park's video makes me weep every time I watch it. I'm a HUGE fan of reading and one of my favorite author's is Maggie Stiefvater.


Her books blow me away. 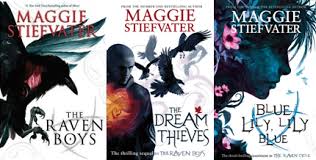 Scorpio Races Book Blurb:
It happens at the start of every November: the Scorpio Races. Riders attempt to keep hold of
their water horses long enough to make it to the finish line. Some riders live. Others die.
At age nineteen, Sean Kendrick is the returning champion. He is a young man of few words,
and if he has any fears, he keeps them buried deep, where no one else can see them.
Puck Connolly is different. She never meant to ride in the Scorpio Races. But fate hasn’t given
her much of a chance. So she enters the competition — the first girl ever to do so. She is in
no way prepared for what is going to happen.

So Alison, if you haven't read any of Maggie's books, I would recommend starting with
Scorpio Races.