Point of View and Stories that JUST WON'T DIE

As you know I'm knee deep in a major manuscript overhaul. My characters shot me out of bed last night with a message and I wearily wrote this on the pad next to my bed: 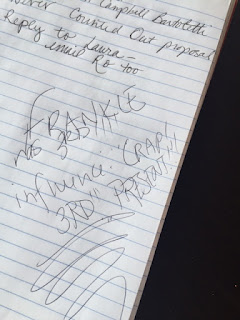 Ignore the nice writing at the top-- thoughtful things to add to my To Do list, written at a very reasonable 11pm. The chicken scratches that appear mid-page are the rantings of a 4:13am writer struggling to match the best point of view to a story that just won't die!

As you know Headless (working title) started out with too many POV shifts. In the first few drafts, each first person/past tense chapter was followed by a third person/present tense passage examining my main character's execution day. It was shifty. Oh so shifty. (And turns out, shitty too.)

I worked out plot kinks, added another important character. Firmed up Elizabeth's struggle with wanting to love Nick, but knowing what he would/could eventually do to her. And then I promptly put the book away. For years. Three years, I think. As you know I like first person present. Even if Rainbow says, "Ugh. It's like reading one long monologue." I write thrillers and the close to the bone urgency of first person-present just seems to fit.

When I pulled Headless back out this month I reread the whole shifty-POV thing. I remembered instantly the love I had for my main character and, likewise, how much I loved the history of Anne Boleyn and Henry VIII woven throughout. I think the POV shift got in the way of showing how Elizabeth and Nick's relationship mirrored Anne and Henry's and so it had to go. Delete. Delete. Delete.

And now...NOW... Now I struggle with the questions: From whose point of view? and What tense? It makes me feel like I'm back in the classroom administering the Language Arts PSSA...What is the author's purpose in writing first person/present tense? Cite evidence from the text to explain your thinking.

When I woke up this morning (for the second time) I looked at my scratches about 3rd person and took a minute to try it: 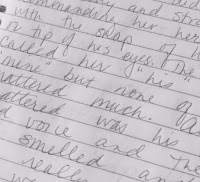 Elizabeth saw what her mother saw, really, she did. Nick, rowdy and strong, pulling her this way and that with the snap of his finger or the dip of his chin. The way he called her "his". The way his voice grew cold at the slightest distance between them-- a warning that he could do more.

Elizabeth saw these things. Yes. But none of it mattered much. All that mattered was his arm around her shoulder and, as silly as it was, his scent. Taking in Nick's salty, sweet scent meant she was in his presence-- that he was by her side. The way he hurt her wasn't right, Elizabeth knew-- her mother would learn this after the attack of course. What mattered to Elizabeth was breathing in his scent and feeling his arms around her because those were the only realities that would ever fill her up and make her whole.


After trying third person, I think I am going to go back and rewrite the entire novel again. Third person might work. More than just an exercise in rewriting the book, I think it might be better for my reader. This one gets dark-- dark yet totally, sadly, completely realistic. Some of the scenes taken from my own past. Writing in third person might put a safe distance between the reader and the traumas of Elizabeth and Nick's relationship.

I need to tell Elizabeth's story. And maybe that is the best reason to try third person? I can tell the whole story, not just Elizabeth's limited view, but the whole damn thing.

I guess you will see soon enough. Headless headed your way at our next writers' group.
Until then,
A