Last weekend, we lost an hour to Daylight Savings. An hour doesn't seem like that big of a deal. After all, it's only sixty minutes, but that hour doubled the sixty minutes I lost between Friday and Saturday when I decided I needed another hour of sleep. That hour I lost was time I usually spend working on SCBWI emails--and if I'm honest, most weekends I spend two to three hours on SCBWI stuff in addition to being a mom, a wife, and a writer. So I entered into Daylight Savings with an hour already lost. By Sunday morning I was already two hours behind. I tried to make that hour up Sunday night, but by Monday during our critique group meeting, I felt that 3rd lost hour of sleep, and I began to lose more and more time. Alison, the snowball effect is REAL.

Bizarre circumstances sprouted each day--Tuesday after track practice (I'm a coach not a runner) I had to wait a half hour for two students to get picked up. Tuesday night, I discovered Girls on the Run started Wednesday at 7:30 a.m. I lost another half hour registering and then lost another hour in the morning with two drop offs to school instead of one--that lost morning hour I usually spend catching up with emails and scheduling social media. Wednesday evening, I picked up my kids after practice as scheduled, got home--planned to make some delicious homemade mac and cheese but my dog was missing in our house...I found her stuck in the drain pit in the far corner of the basement, half submerged. Alison, our dog is terrified of thunderstorms. TERRIFIED. I got her out, cried, cried some more because I thought about what could have happened if she went in head first, put on my brave face for the kids, gave her some aspirin, ate some chocolate, made dinner, read to the kids, tried not to think about what could have happened to her some more, and decided I had enough. I went to bed early--it was 10:30 p.m.  (Yep, that's early for me because I still had to shoot out some quick emails after the house was straightened and the kids went to bed.) I had planned to finish editing the final 30 pages of Starr Fall, Book Two that I promised my publisher, but I didn't have it in me last night, and 6:15 a.m. came entirely too early this morning. Once the house was empty, I planned to finish editing Book Two before I wrote my blog post, but I realized I needed a Brain Dump.

Alison, this post is my St. Patrick's Day Brain Dump. Two years ago I wrote a Brain Dump Post. Brain Dumps are writing exercises that are vital to writers. Sometimes we need to get rid of all the STUFF floating around in our brains. Everyone's life is busy--We're so scheduled that losing sixty minutes is a BIG DEAL and sometimes a free write or a Brain Dump seems like an extravagant waste of time. It isn't. These exercises are vital to the writer. We need to stretch our brains. We need to warm up our muscles before we write just like an athlete warms up before practice, and like an athlete, we need to cool down after our writing workouts. Athletes remove the lactic acid buildup from their muscles. I'm not a scientist, nor do I play one of TV, but I believe writers also need to cool down to remove the lactic acid buildup in our brains through Brain Dumps. After a good Brain Dump, we can find writing inspiration everywhere we look. 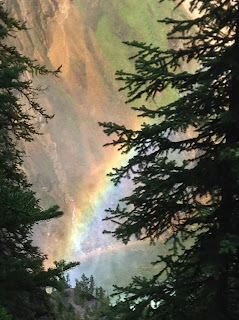 So Alison, I'll talk about my writing mentors next time, but today, I just needed to find time to Brain Dump. I'll leave you with some advice from a wise 7 year old. 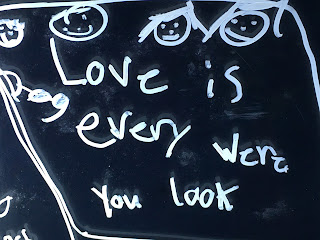 Sharing the writing love one letter at a time,
Kim
P.S. Here's my pitiful pup in her recovery. 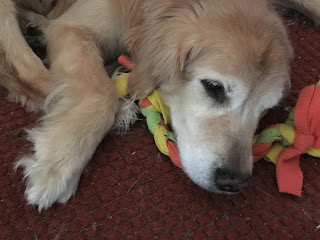