What RULES Your Character?

I put Girls of Summer away for a spell to let her simmer before big revision #6,402.

Okay, not like streamers and gin parties, but starting a new novel PARTY.

It is such a happy, anything-is-possible time. I can fall in love with my characters as they uncover themselves to me. Not worry about... tightening plots... revising scenes... word-freaking-choice... too many ellipses.

I mean, I know where I want to go with Untitled Story. She's been the star of my journal for two weeks. See? 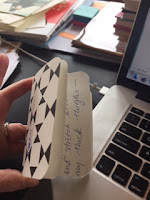 Isn't that journal adorable. Gift from my bestie. She knows that I have a BIG obsession with LITTLE things. I filled all fifty, itty-bitty pages with backstory for CeCe, the star of Untitled Story. (And, don't worry, I'm not going all meta on you here, the title isn't "Untitled Story". Just not feeling the working title: OBEAST.)

Anyway, the most surprising thing for me so far with CeCe is that she has all of these rules. She likes structure. Plans. Expectations. For example, shopping at Goodwill has exactly two rules.

The rules of Goodwill:

In my first draft, this is where CeCe gave up the rules of Goodwill: 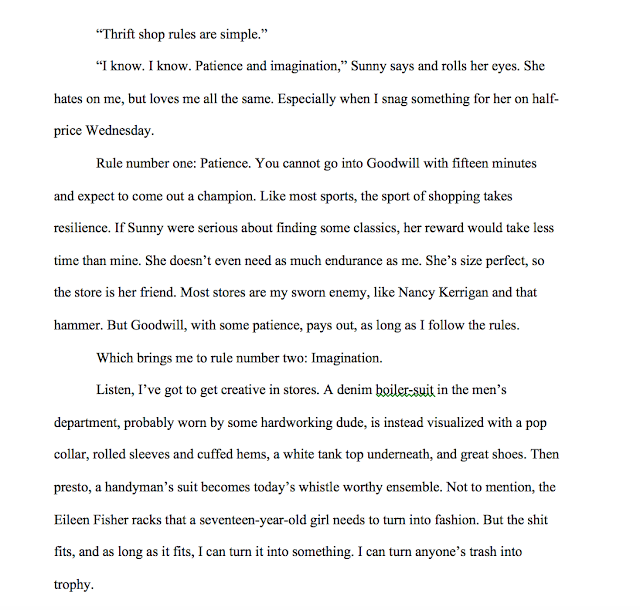 I know it's backstory heavy right now. But, hey, what are first drafts if not backstory and shitty sentences? Just like CeCe's Goodwill rules, I need patience and imagination to finish the draft and then turn it into trophy. (Okay, let's not get carried away. "Trophy" is too strong a word here. Consider this a first draft.)

I'll revise to turn this into a stronger scene, let the rules come along more naturally. For today though, I wonder about other characters and their rules? Like Edward Cullen (oh, don't roll your eyes at me!). 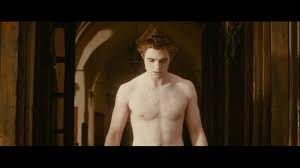 No sunlight in public.
No human hunting.
No shirts.
What rules are missing?

“Also, I feel that crying is almost--like, aside from deaths of relatives or whatever-- totally avoidable if you follow two very simple rules:

Everything unfortunate that has ever happened to me has stemmed from failure to follow one of the rules.”

Does your character create rules for herself/himself? I'd love to hear about them.

For now, let me dance off to my first draft PARTY.