Book Review: The Upside of Unrequited by Becky Albertalli

I was shocked... I mean really, truly SHOCKED to find that neither one of us wrote a book review for Simon vs. the Homo Sapiens Agenda by Becky Albertalli. This was one of my favorite books from 2015, yours too! I made mention of the book in another review, but did not give Simon, his Oreos, or his humor any of the LOVE they deserved.

Well, I won’t make the same mistake with Becky Albertalli’s second book, The Upside of Unrequited. 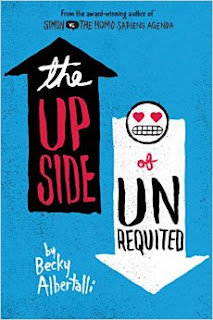 In June of 2016 the cover reveal for her second book hit the #Twittersphere, along with the blurb: “Seventeen-year-old Molly Peskin-Suso knows all about unrequited love- she’s lived through it twenty-six times. She crushes hard and crushes often, but always in secret. Because no matter how many times her twin sister, Cassie, tells her to woman up, Molly can’t stomach the idea of rejection. So she’s careful. Fat girls always have to be careful.”

After reading the blurb, I had three pretty lofty expectations for this book:

1.)  I could trust Albertalli using "Fat girls" and "crush" in the same book positively.
2.)  We would see unrequited love in the flesh, because in YA fiction that would feel amazing!
3.)  I would love Albertalli's writing as I had in Simon.

These were the expectations. But could the book deliver? I received the book last week and devoured it. There were so many scenes that I loved. So many bits of Molly’s thoughts that were perfection.

1.)   I could trust Albertalli using "Fat girls" and "crush" in the same book positively.

"There's a reason I've had twenty-six crushes and no boyfriends. I don't entirely understand how anyone gets a boyfriend. Or a girlfriend. It just seems like the most impossible odds. You have to have a crush on the exact right person at the exact right moment. And they have to like you back. A perfect alignment of feelings and circumstances. It's almost unfathomable that it happens as often as it does."

I completely connected with the main character Molly. In her mind everyone is on a fast track in the romance department and for some reason she is left behind. (She connects this at first to her body, more on that later.) Molly is Etsy, Pinterest, and wedding blog obsessed. She’s incredibly observant, which is totally characteristic for someone who thinks she needs to “catch up” with her friends.

I love Molly’s voice. The way that she examines her insecurities feels very real. I love that food is viewed positively in the book. (Aside from her grandmother’s comments. And, with that, well done, Becky! Oh the feelings you gave with eating the cookie dough next to grandma. Blech! So real!) I love that clothing was also seen positively—Molly’s 4th of July outfit and the dress for the wedding. (MODCLOTH and TORRID take note.)

The female ensemble that Becky Albertalli assembled is fabulous. They're funny, loving, and happy, but they are also upsetting and downright unlikable at times.

2.)  We would see unrequited love in the flesh, because in YA fiction that would feel amazing!

When I saw that word in the title I went bananas, because hello, don’t we always see HAPPILY EVER AFTER, not UNREQUITED? I thought, if anyone can do UNREQUITED justice, it is Albertalli.

UNREQUITED was my middle name for all of my teen years and most of my twenties. Molly has twenty-six crushes by age 17. That number should be higher, right? My first crush came at eight. Snow White would never reciprocate my love for her, it was completely one-sided. Unanswered. Unreturned. Unrequited. And that was just the first of many. 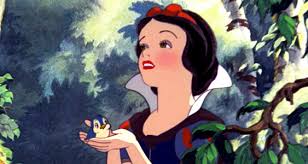 I wanted more of Molly’s unrequited stories. We heard about some of the 26 crushes, even giggled over the clever names she gave them, and followed her jump-to-conclusion moments of “unrequited” for each crush. By the time we met Will and Reid, we were desperate for Molly to find love.

Will there be another book where we find out what happens to Mina and Cassie? Molly and the boy? Olivia???? All of these relationships to ponder.

3.)  I would love Albertalli's writing as I had in Simon.

Albertalli knows how to write a character that is smart, funny, and insecure. She takes an ordinary cast of characters and gives them dimension. She makes us want to follow them around. Explore their town. Watch them fail and then hopefully succeed. She did this for Simon. Did she do this for Molly? Hell, yes.

In both books, Albertalli gives us main characters to care about. She gives us rich families and friendships in both books as well. The moms in Upside of Unrequited were genuine. I loved the driving scene with Nadine and Molly:

“It’s weird, right? Cassie having a girlfriend.”
“She’s not technically her girlfriend.”
Nadine grins. “I give it a week.”
That makes me laugh, but there’s also this sad sort of tug in my chest.
“Yeah, it’s weird,” I say.
“I know. Oh man, Momo. This is a tough one.” She nods, still looking at the road. “You know, growing up, my brother was such a dickwad, but your aunt Karen and I were really close. And I remember this. I remember when she got a boyfriend, and she just fell off the grid. It sucked.”
“Yeah.”
“And no one warns you about this. No one tells you how hard it is, because, yay, love! And we’re so happy for them! But there’s this sharp edge to it, right? Because yeah, you’re happy for them. But you’ve also lost them.”
My heart twists. I can’t speak.
“But Mo, they come back to us. You know? You roll with it. It’s weird for a while. But they come back. You’ll get her back.”
I tuck my knees up and stare out the window. We’re almost at Dupont, heading downtown. And there are so many people out. There’s this palpable energy in the air. It’s the kind of night where strangers start hugging and everyone’s drunk and loud and happy just to be in the middle of all of this. I bet people will remember today, even when they’re old. I bet I will, too.
“Pretty wild,” Nadine says.
“Yeah.” I nod. And suddenly, I feel like crying, but not in a bad way. More like in the way you feel when someone gives you a perfect present—something you’d been wanting, but thought you couldn’t ask for. It’s that feeling of someone knowing you in all the ways you needed to be known.
Becky Albertalli is quickly becoming a favorite voice in this genre.
I eagerly await her next book.