By KB/KIM February 25, 2016
Dear Alison from one fangirl to another,

Thank you for your recap on Alvina Ling's Plotting Session. It's times like these when I wish I had a clone so I can listen to all the different breakout sessions and take notes--I know, I know. Geek alert. And the Vomit Draft concept? That's exactly what my first drafts feel like, but a good kind of vomit you know--the dumping of words onto paper instead of other places. I should probably change the subject. So, we spent the morning in Rainbow Rowell’s Breakout Session. Officially, as Regional Advisors for SCBWI, we collected tickets. Unofficially, we considered ourselves bouncers, but you know what, all those fangirls and fanboys who came to her session LOVE Rainbow, and they were just as excited and starry eyed as we were. We kept our cool though, didn't we? On the outside, we were professional, calm, cool, collected, but on the inside, we were, well we were... Rainbow began her writing life as a journalist. She lived with tight deadlines, so the leap to book publishing deadlines was really no leap at all (except of course for the length of the manuscript).  As a journalist, she needed to remain emotionally detached and present issues objectively. Journalism beat her voice right out of her. She doubted whether she'd recover from this loss, but we both know she did.

Her first official YA Book was Fangirl. Of course, we all assume Eleanor & Park, but actually she wrote E&P as an adult book for her UK publishers. E&P became a YA novel when her publishers decided to bring it to the US.

Can you imagine Eleanor & Park as an adult book? Think of how many readers would be bereft of this wonderfully beautiful novel. It goes to show, YA readers possess excellent and discriminating literary taste.

But how does Rainbow create a teen voice?

For Rainbow, it all begins with music. She creates playlists to jam to while she’s working on a novel. Fun songs, sad songs, happy songs, songs that reflect the mood she wants to capture in her story.

Some scenes take weeks, and it’s difficult to maintain a certain mindset for two or three weeks straight and still live and function (theoretically) in the real world. Rainbow’s playlist serves as a mood placer, especially if she’s working on a sad or depressing scene. When it’s time to write, she hits play and BOOM!! the music transports her to the emotional temperature of a scene.


WRITER TIP 1: Create a playlist for your novel. Songs should reflect moods of story/scene/character.


If Rainbow had to pick one song to capture Eleanor & Park, it would be Hast Thou Considered the Tetrapod by the Mountain Goats. Take a listen.

WRITER TIP 2: Watch people. Watch how they interact. Pay attention to their body language. Listen to their conversations. Spend time at the mall, at the coffee shop, in the classroom. Anywhere teens hangout.

WRITER TIP 3: Remember that you were once a teenager. Sure it was probably a different decade (or 2 or 3 or 4) but those fears, those hopes and dreams, and crushes are still the same. Capture the essence of your feelings and you capture the teen voice.

FANGIRL TIME: So Alison, we kept our cool during the session, but there was an entire room of fangirls and fanboys who wanted some Rainbow of their own. 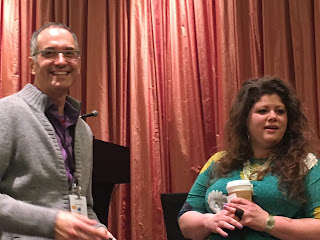 After her keynote, I went to her autograph party, and that was my opportunity to fangirl with her, and can I tell you, I totally did. I came home with an autographed collection of four of her books, a swag button, some stickers, and a fangirl picture of my own. 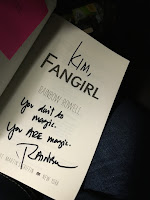 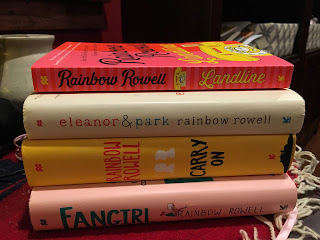 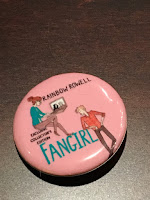 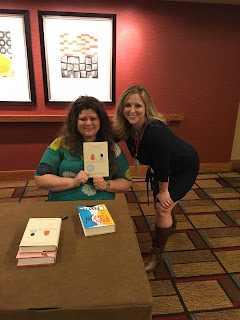 So Alison, my Saturday at the #NY16SCBWI was filled with Rainbow and Books--not a bad way to spend an afternoon. And by the way, I'm reading Carry On and Simon Snow loves cherry scones--clearly he (and Rainbow) possess excellent taste in pastries that can serve as mid-morning breakfast or an afternoon treat, depending on one's mood.