Two posts in two days. Can you believe it? What luck! What fun! What could be the cause of two posts in two days? Well, yesterday was AND THEN HE's Book Birthday and I shared a lot of love for the world in the post. To celebrate the book birthday (and mine) AND THEN HE is only $.99 on AMAZON. That's a cause to party if I ever heard one.

My fellow Inkspell Publishing Writer friend M.S. Kaye releasesAwaken from Death, Book 2, of her Born from Death series yesterday. I'm reading Strong as Death now and WOW, this book gives you all the creepy feels it promises too. 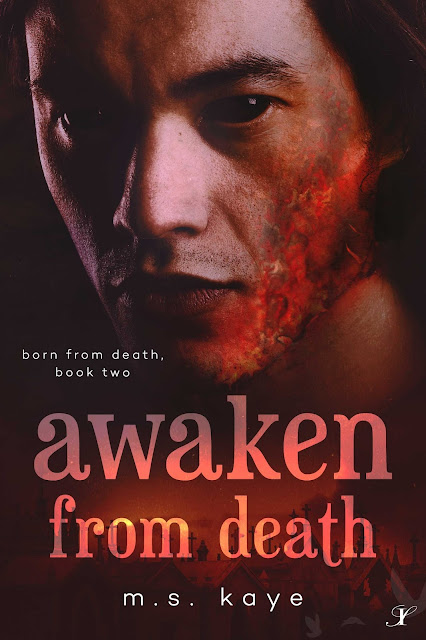 That guy is Archer. We all need him in our lives!

Awaken from Death
Born from Death book 2
by M.S. Kaye
Will they discover the truth of their ancient connection before it destroys them both?
Ilona continues to struggle with loss, as well as trying to find where she fits in with other people, if she ever really will. She starts taking dangerous risks.
Archer is desperate to protect Illona and discovers more about himself in the progress. When Ilona is in danger of being mauled by a dog, he desperately tries something that shouldn’t be possible. And yet he succeeds.
This is just the beginning of his discovery of who—what—he truly is.
Release date 10/15/16 from Inkspell Publishing.
Amazon   |  Barnes & Noble  |   iTunes   |   Kobo
Add to your to your to-read on Goodreads.
Strong as Death, Born From Death book 1
Ilona discovers what it means to have a mother who is a modern woman and a father who is a 19th-century gentleman ghost.
After being hit by a car and taken to the hospital, Ilona starts to realize she’s different from other people, and that her mother has hidden the truth from her. She sneaks out of the hospital in order to discover the truth.
A mysterious boy named Archer guides her through Brooklyn and introduces her to Hendrick, the man who claims to be her father—though he died in 1890.
Ilona must discover not only what she must do to rid the city of Soll, a sadistic and powerful spirit, but also what it means to be half ghost. She proves what her mother told her—love is stronger than death.

Sneak Peek at Awaken from Death:
The blond boy didn’t walk up to a urinal or into one of the stalls, or even up to the mirror. He stood in the middle of the room.
Invisible, Lettie watched curiously.
Something moved backward away from him. Out of him.
She recognized Archer’s shiny black hair and strong frame even before she could see his face.
She gasped. But ghosts can’t inhabit people.
The blond boy shook his head and looked around. “Fuck.”
“I’m sorry,” Archer murmured so the boy wouldn’t hear.
Lettie stared at both of them.
The blond boy turned, leaned his hands on the counter, and looked at himself in the mirror…not the way people usually looked at themselves. It was more like he was trying to see something more than was in the reflection.
Archer watched him, as if waiting for him to see something.
Then Lettie understood. Archer hadn’t merely inhabited the boy—he’d possessed him. But there were only a couple ways that’d be possible—if he were half ghost, or if he…
A memory struck Lettie like a horse galloping across a battlefield. An ancient memory. Lettie had been around since the beginning of time on Earth, but most of those thousands of years she let slink around the crevices of her mind. It was mostly just walking the bridge with the newly deceased. There were a few memories, though, that burned into her every time she let herself pull them forward. And burned was precisely the right word.
She knew—or rather, remembered—why Archer would never leave Ilona.

Author Bio:
M.S. Kaye has several published books under her black belt. A transplant from Ohio, she resides with her husband Corey in Jacksonville, Florida, where she tries not to melt in the sun. Find suspense and the unusual at www.BooksByMSK.com.
To receive news on upcoming releases, sign up for email updates on her website.