And forgive me, I will be shouting to the world that Starr Gone is out! Muah! Thanks for all your Writer Love, and let me know what you think in the comments! 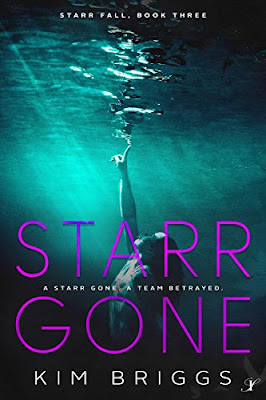 A Starr gone. A team betrayed.
You never know who your true friends are until a gun’s pointed at you. One will take a bullet, and the other will pull the trigger. Starr learned that lesson the hard way.
The perfect smile. A killer attitude. General Treadwell wanted nothing more than to turn Starr Bishop into the ideal assassin, but she’s far more valuable as Jessica Chamberlain, granddaughter and heir to Chamberlain Chocolates. Luckily, he’s found two enthusiastic replacements. They lack Starr’s intelligence, but no matter, they possess their own weapons of persuasion along with a flair for the dramatic, and that’s never a bad thing.
Di, along with Christian, Frank, Ben and Coda, are determined to keep Starr safe, but the depths of betrayal crack the very foundation of the team. When Starr becomes a pawn in a game of power, money, and manipulation, Di channels her WWSD (What Would Starr Do) to rally the team. She owes her best friend that much. No... More.

Starr
While we say our goodbyes to Coda and Ben, Jude borrows Christian’s phone to order the pizza. “Great, thanks,” I hear him say. “It’ll be ready in about a half an hour. It takes about fifteen to get there. Hey Christian, want to go for a ride to pick it up?”
Christian pushes up from the floor. “Sure.”
At the sound of his voice, my heart races. “I don’t think you should go.”
“Starr, it’s just pizza.”
I reach for his hands and pull him down next to me. “Forget the pizza.”
He leans in and whispers, “Starr, it’s just pizza and besides, we don’t want to leave Jude alone and I’m not sending Di in my place.”
I glance over at Di.
No, she’s been through too much. Much too much. My stomach twists in knots. “I’ll make it up to you later,” he promises.
“Please don’t go,” I whisper and throw my arms around him. I find his lips with a wild desire never to let him go. I know it’s silly. He’s just going for pizza, but the way my life’s been rolling lately, I’m not taking any chances.
“Come on,” Jude says with a laugh in his voice. Dissimilar from his usual annoyed reaction. It only makes me more nervous. “Pizza awaits.”
Christian struggles to pull away, but I don’t want to let him go. Not yet. “I love you,” I blurt out.
He smiles at me. “I love you too. I’ll be right back.”
Tears well up in my eyes as I watch his disappearing back.
“Starr, are you alright?” Di asks.
“Yeah, I guess. No, not really. I’m feeling a little paranoid.”
“Let’s watch a show—something mushy and icky the guys would never want to watch, and no news,” she warns pointing the remote in my direction.
“No news,” I concede.
Before Di can change the channel, a newsflash comes up. “We’d like to interrupt your regularly scheduled viewing for a brief announcement:…

About the Author:
Kim Briggs once smashed into a tree while skiing. The accident led to a concussion, a cracked sternum, temporary notoriety as a sixth grader returned from the dead, and the realization that fictionalized accounts are way more interesting than just slipping on the ice.
An unhealthy obsession with conspiracy theories combined with a love of travel and happily ever afters led Kim to write her YA novel, Starr Fall, where a secret organization decides 17-year-old Starr Bishop is not only the model student, but the ideal assassin. While in hiding, Starr meets dark, moody, and dead sexy Christian Evergood. Cue the swoon worthy music. But it’s not all happily ever afters for Kim. Her NA novel, And Then He, explores the dark and scary corners of the human psyche. Following a night of innocent flirting with a handsome stranger, Tiffani finds herself in the midst of a nightmare she can’t escape. And Then He is available through Amazon and other major book retailers. Starr Fall released November 2016 with Inkspell Publishing, followed by Starr Lost in January 2017 and Starr Gone in June 2017. Her novella, Avalanche is part of the Valentine Kisses Anthology and released February 14, 2017.
When she’s not doing something writerly, Kim can be found jumping into snowdrifts with her three kids, husband, and dog. She’s careful to avoid trees.