I considered posting the text that I sent you this past weekend about Girls on Fire, but I thought better of exposing our readers to the amount of expletives used. Instead I will share a censored version:

Robin Wasserman's masterpiece is a dark and twisty tale, too believable to be anything but young adult horror. Set in Battle Creek, Pennsylvania in 1991, a fitting town for Wasserman's many battles: high school reverence, best-of-friend manipulations, sexuality, and the battle to be just a girl in the world.

Kurt Cobain (not Gwen) plays the soundtrack to this novel. His songs hang like storm clouds around the girls-- all devastation, destruction, and angst.

Hannah Dexter seeks something more out of life. Then Hannah meets Lacey Champlain who is equal parts seductress and best friend. Lacey pulls Hannah (now Dex, per Lacey's order) into the fierce and violent fold of high school girlhood.

The story opens (and spoiler-ish, ends) with a suicide. A boy took his life in the woods. Like most of the boys in the book, Craig means little to Lacey and Dex. But, the girlfriend he left behind, Nikki, means everything. Fear of Satanic cults permeate the town. Those fears are well founded, but the devil those parents know is no match for the girls in Battle Creek.

Female relationships are beasts to write well, due to equal parts love and hate/ endure and surrender/ obsession and abandon. Wasserman captures the tightrope that is girl friendship. She does so without adult voice or sweet reminiscence of girlhood, two things that have no place in this type of book. Her world-- the hierarchy and battle of Battle Creek, Pennsylvania-- is honest and terrifying. 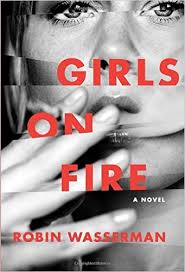 Slide back in time, when grunge was king, and meet the girls of Battle Creek, Pennsylvania. They will scare the flannel off your back, but you will love them all the same.

Kim, you must read Robin Wasserman's Girls on Fire. The book hit every note for me: rich language, layered characters, and a complex plot. While you are at it, check out Wasserman's article on LitHub about GIRLS in fiction. Which, like Girls on Fire, is too good to miss.